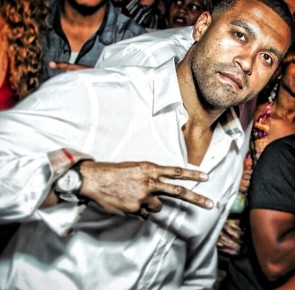 Real Housewives of Atlanta cast member Apollo Nida began his 8 year prison bid Wednesday (Sept. 10). Nida, husband of castmate Phaedra Parks, reported to a minimum security federal prison in Lexington, Kentucky, where he officially became inmate 65725-019. Parks, an Atlanta attorney, would not comment on record about tabloid reports that she was upset that Nida ignored his children and spent much of his time drinking in clubs during his last weeks of freedom.

“Phaedra is now putting all of her energy into ensuring the well-being of her two children and making decisions that are in their best interests,” her publicist said in a statement to CNN Wednesday. “This situation has put a tremendous strain on Phaedra and her family, and she is working hard to bring back a sense of normalcy to everyone’s lives.”
Nida, who appears on the reality TV series with Parks, was arrested in January and pleaded guilty in May to charges in a fraud scheme that federal prosecutors say stole millions of dollars from at least 50 people over four years.
He must serve five years under parole supervision after he completes his eight years in a federal prison, U.S. District Court Judge Charles A. Pannell, Jr. ordered during sentencing in July.
This is the second prison stint for Nida, who previously served five years in a federal prison for auto title fraud before marrying Parks in 2009.
Nida created two fake collection companies to gather personal information used to steal victims’ identities, U.S. Attorney Sally Quillian Yates said after his sentencing in Atlanta. He used the information to get fraudulent auto loans in the names of his victims, according to the criminal complaint.
He was busted after a year-long investigation by the U.S. Secret Service. (CNN)

Nida is reportedly upset with his estranged wife because she didn’t show up for his court hearings and she’s been on a book tour during the last few months of freedom and wasn’t there to comfort him.