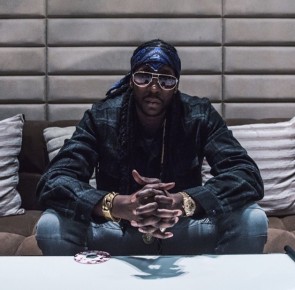 Atlanta-based rap star Tauheed “2 Chainz” Epps is being sued by attorney Kent Bridge for unpaid legal work. Bridge is seeking “in excess of $10,000” from the rapper.

Epps and 10 others on his tour bus were arrested in Oklahoma City on Aug. 22, 2013, after refusing police commands to get out for nine hours, police said.

Bridge claims in the lawsuit that he negotiated Epps’ peaceful surrender after being hired by the rapper over the phone.

He claims in the lawsuit that the on-scene police commanders had been contemplating a tactical entry and “it was clear that the situation was about to escalate to a point where there was a possibility of death or bodily harm to those on the bus.”

An Oklahoma City police officer had pulled over the bus on Interstate 40 because of a defective tail light and then smelled an “overwhelming odor of marijuana” coming out of the bus door, according to court affidavits. Epps had performed Aug. 21, 2013, in concert at the Chesapeake Energy Arena.

Police seized two pistols, a shotgun and ammunition during a search of the bus after those inside surrendered.

He also claims in the lawsuit that he negotiated with prosecutor Scott Rowland at the scene about what charges would be filed. He claims it was decided a misdemeanor would be filed rather than “various potential felonies.”

Rowland, the first assistant district attorney, said Friday that Bridge absolutely was involved in negotiating the surrender of those on the tour bus. The prosecutor disputed the rest of Bridge’s claim, saying he would not have agreed on what charges would be filed before the bus was even searched. (News OK)

2 Chainz pleaded guilty in October 2014 to a misdemeanor, obstructing a police officer in the performance of his official duties. He paid a fine of $771. He was represented at the Oklahoma County jail and in court by Oklahoma City defense attorney Mack Martin.