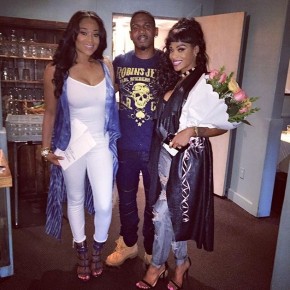 Love and Hip Hop: Atlanta‘S Stevie J has let it be known that he has an issue with his baby mama Mimi Faust coming out as a lesbian. The producer says that he has a problem with Mimi and another woman raising their 6-year-old daughter.

Stevie tells TMZ he doesn’t condone Mimi’s new relationship with GF, Chris. Mimi came out on Monday night’s episode of “Love & Hip-Hop: Atlanta.” He says he doesn’t want his little girl being raised in a lesbian household, and thinks that’s only a job for a dad and a mom.
Even more shade — Stevie thinks Mimi’s only deciding to be lesbian for a good story line on ‘LHHA.’
He’s not threatening legal action yet, and believes he’ll convince Mimi to see things his way. (TMZ)

My problem with Stevie J criticizing Mimi’s relationship is that he’s being hypocritical. On one hand it’s ok for Mimi to have sexual relations with him and his wife Joseline, but it’s not ok for her to be in a relationship with a woman when he’s not involved.

Whoever a person sleeps with is entirely THEIR business. It’s nobody’s place to judge a another person’s sexual preference. As long as everyone involved is a consenting adult, who a person chooses to sleep with doesn’t bother me at all, because it doesn’t affect me personally. Everyone is entitled to live their life however and with whomever they choose to.