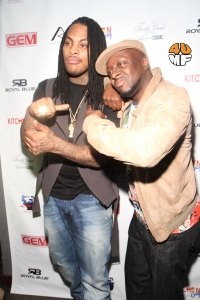 Rapper/producer/musician Wyclef Jean took a hiatus from music to take care of some very important work. Just over three years ago, an 7.0 earthquake shook the tiny island of Haiti, killing hundreds of thousnds and leaving millions homeless. When news of the earthquake broke, Wyclef headed back to his home country to help out. The former Fugees member was very vocal about the rebuilding process and even threw his hat into the political arena to run for president in Haiti. Although he his presidential hopes were dashed, Wyclef still does what he can to help out his fellow Haitian brothers and sisters in the slow, pain-staking process of putting their lives and country back together.

Fast forward a couple years later and Wyclef, who also released an autobiography while taking a break, is back on the music scene with a brand new mixtape. Taking all of hip hop artist to school. Giving the heart of hip hop and music new life. Titled, April Showers, the Grammy-winning rapper and producer makes a triumphant return with a solid mixtape filled with club bangers, soulful hits and freestyles.
To mark the release of April Showers, Wyclef held an exclusive listening party for industry insiders and VIP guests. Held at The Spot located on the first floor of the luxe Trump Soho in lower Manhattan, the Haitian native moved the packed crowd with tunes from his latest project.

The rest is at 4UMF