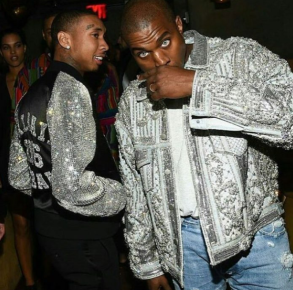 Tyga’s Kardashian connections have really been paying off for him lately. Last week the rapper’s girlfriend, Kylie Jenner, surprised him with a new Bentley truck after his Ferrari got repossessed. Now the Kardashian clan has pulled a few strings and gotten Tyga a record deal. Kanye introduced Tyga as the newest member of G.O.O.D. Music, during his New York fashion show.

Tyga has close ties to Kanye on a personal level—the Kylie Jenner and Kim Kardashian connection, obviously—but also on a musical level as Tyga said ‘Ye executive produced his 2015 album The Gold Album: 18th Dynasty. That project wasreleased independently on Tyga’s Last Kings label after he severed ties with YMCMB. For what it’s worth, Tyga is still listed as an artist on the official Young Money and Cash Money websites, respectively, and it’s been like that for some time.(Complex)