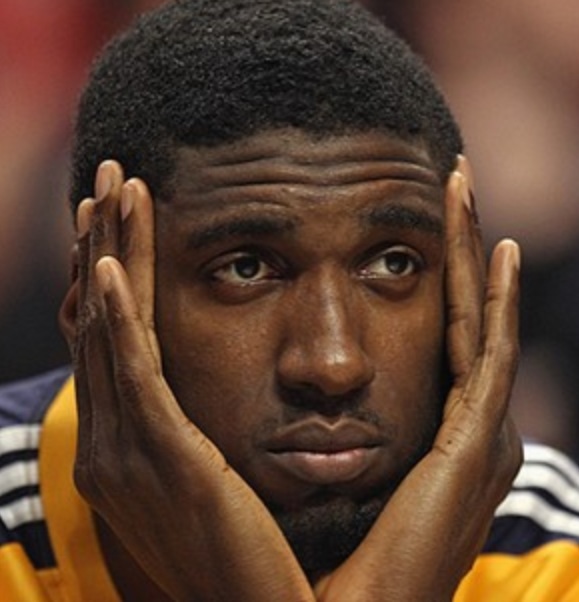 The NBA announced Sunday that Roy Hibbert has been fined $75,000 for using “inappropriate and vulgar language” during a televised post-game press conference following Indiana’s 91-77 victory over Miami in Game 6 of the Eastern Conference finals on Saturday.

Hibbert used a homophobic slang term in describing his defense on Heat forward LeBron James and used a profanity in reference to media members as he responded to a question about his placement on this year’s Defensive Player of the Year voting. The Pacers’ center issued an apology for his comments earlier Sunday.

“I am apologizing for insensitive remarks made during the postgame press conference after our victory over Miami Saturday night,” Hibbert said, in a statement released by the Pacers. “They were disrespectful and offensive and not a reflection of my personal views. I used a slang term that is not appropriate in any setting, private or public, and the language I used definitely has no place in a public forum, especially over live television. I apologize to those who I have offended, to our fans and to the Pacers’ organization. I sincerely have deep regret over my choice of words last night.”

Asked about his defense during a crucial fourth-quarter play that ended with James being called for an offensive foul and a technical foul, Hibbert explained that he was attempting to do a better job of helping Paul George defend the 2013 MVP.

“The momentum could have shifted right there if [James] got an easy dunk,” Hibbert said. “There was what ‑‑ was it Game 3 here? I really felt that I let Paul down in terms of having his back when LeBron was scoring in the post or getting to the paint, because they stretched me out so much. No homo.”

That two-word phrase was popularized by rappers who, according to Slate, used it to “rid [statements] of possible homosexual double-entendre” and, generally speaking, to ”acknowledge and distance themselves” from homosexuals.

Asked about why he finished 10th in this year’s Defensive Player of the Year voting, Hibbert responded that the media members who vote for the award weren’t paying sufficient attention to his small-market team.