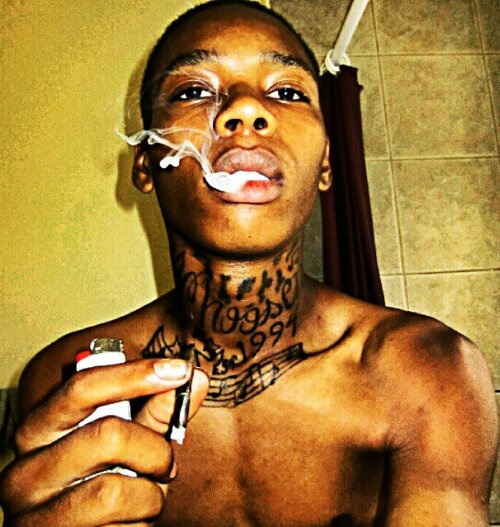 Chicago rapper Joshua “JayLoud” Davis, 18, was murdered on Christmas day while wearing a hoodie honoring his slain best friend Joseph “Lil JoJo” Coleman. Reports say that Davis had gotten into an argument with some men on a bus, and when he got off the bus they chase him and murdered him.

“Joshua Davis, 18, of the 7200 block of South Bell Avenue, was shot several times after getting into a fight with a group of men in West Englewood, said Officer Jose Estrada, a police spokesman.No one was in custody as of Wednesday morning in the shooting, which occurred shortly after 11:30 p.m. in the 2000 block of West 69th Street, police said.”

“According to a law enforcement source, Davis had argued with the men on a bus. After he got off, they chased after him and one of the men unleashed several shots.”He was killed because he was wearing a hoodie and getting off the bus,” said the victim’s sister Selina Davis, 24. “He was a great boy. He was only a baby.”Police said it was not clear what article of clothing Davis was wearing at the time of the shooting or what the argument with the men on the bus was about.Selina Davis said her brother, whose rap name was JayLoud, was wearing a “JoJo” hoodie to honor his best friend, who was killed in September.Coleman, also 18, reportedly was feuding with rapper Chief Keef before his death, but it was not clear if Davis’ death was related.Joshua Davis was taken to Advocate Christ Medical Center in critical condition and died there early Wednesday morning, according to the Cook County medical examiner’s office.Johnathan Moody, a cousin of the victim, said he and other friends had warned Davis about wearing the “JoJo” sweatshirt around the neighborhood.”We would tell him, ‘That ain’t good to wear that hoodie.’ But that was his best friend,” Moody said.Moody and other family members said they heard about their loved one’s death from friends and Facebook posts.”I guess the guys he got into it with, they were with another clique,” said Moody, 18.”It’s dumb. To kill someone over a hoodie?” Moody said. “It’s pointless, man. All this murder is pointless.”On a JayLoud video posted on YouTube, the victim raps in one song that “We know them and they know us, let’s get it. Smoke ’em like some dope when we roll up.”On Dec. 17, a tweet from Davis’ Twitter handle @JayLoud93 stated “I wear my #JOJOWORLD hoodie everywhere f— ah opp.”“Opp” is slang for opponents, rival gangs.On his Twitter account, @JayLoud93 also includes hashtag notations #069 and #BrickSquad, which police say are references to the Brick Squad faction of Gangster Disciples.Police said Coleman was affiliated with the Brick Squad faction, but it was not clear if Davis was connected to the gang.”