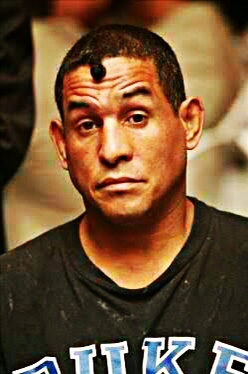 Former boxing champion Hector “Macho” Camacho went into cardiac arrest after being shot numerous times in the face and neck last night. Camacho was the victim of a drive-by shooting outside of San Juan, Puerto Rico. He was rushed to a nearby hospital and is listed in critical condition.

Camacho was sitting in the passenger seat of a Ford Mustang with childhood friend Adrian Mojica Moreno when the shooting occured. Moreno was killed in the attack. ESPN reports:

“Friend and former manager Ismael Leandry told The Associated Press Wednesday that doctors were waiting for Camacho’s mother to decide whether Camacho, 50, should be taken off life support. She was expected to arrive Wednesday morning from the U.S. mainland.”

“We just have to wait to see if Macho gets better. It’s a hard battle,” Leandry told AP.

“Camacho was shot as he sat in the passenger’s side of the car outside the Puerto Rican capital Tuesday and was rushed to the trauma center in San Juan. Doctors said he was in critical but stable condition after suffering cardiac arrest at 4:15 a.m. on Wednesday.”

“He went into cardiac arrest. The doctors were able to get his heart started again with the medicine, and we are maintaining his blood pressure and pulse stable medically right now to see whether during this morning, afternoon or evening we see a positive change,” Torres said.

“Torres cautioned that there was decreased brain activity in the former champ overnight.”

“We will maintain him in this way we are maintaining him medically, and we will wait to see how he responds,” Torres said. “He is a strong guy. The prognosis could change if he improves. The neurosurgeons are not intervening further at this point.”

“Another man in the driver’s seat of the car, identified as Adrian Alberto Mojica Moreno, 49, of Toa Baja, died in the attack, in which at least one gunman opened fire on their vehicle in Bayamon, according to a statement from police.”

“Mojica Moreno’s relationship to Camacho wasn’t immediately known, but on Wednesday, detective Alex Diaz told ESPN.com that Mojica Moreno had nine bags of cocaine in his possession with a 10th bag open in the Ford Mustang, which was registered to Mojica Moreno. He had been arrested for possession of controlled substances in April 2012, according to Diaz.”

“The bullet apparently struck Camacho in the jaw but exited his head and lodged in his right shoulder and fractured two vertebrae, Torres said. Mojica Moreno was shot right next to his Ford Mustang as he got out and tried to flee while Camacho was shot in the passenger’s seat.”

“Camacho’s condition is extremely delicate,” he told Telenoticias on Tuesday night. “His physical condition will help him, but we will see.”