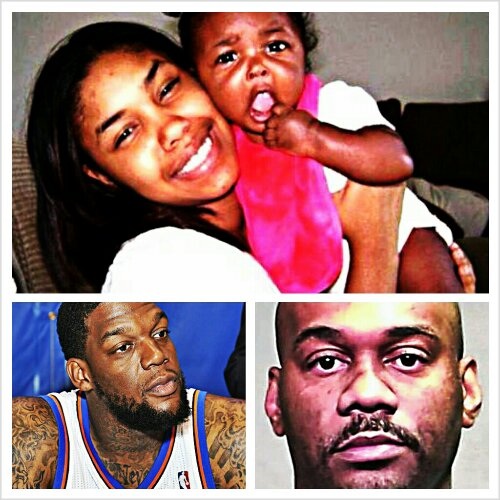 Frederick Goings, a Chicago attorney was found guilty of two counts of murder, in the deaths of Nova Henry, 24, and her 10-month-old daughter Ava. Henry was the ex-girlfriend of former NBA star Eddy Curry, and the mother of his two kids.

The Chicago Tribune reports:
“Frederick Goings, 40, was convicted of two counts of first-degree murder by a Cook County jury that deliberated a little more than four hours.The victims, Nova Henry, 24, and her 10-month-old daughter, Ava, were found shot to death inside their South Loop town house in January 2009. Henry’s 3-year-old son Noah, who also was Curry’s child, was found in the town house unharmed.”

“Goings expressed no emotion as the verdict was read. During McKay’s animated closing argument, Goings leaned on the left arm of his chair and hardly flinched.At one point, McKay flung his arms in Goings’ direction after counting off on his fingers several pieces of evidence. “Reasonable doubt? There is no reasonable doubt in this case,” McKay said. “None.”Prosecutors said earlier in the trial that Goings, a family attorney, had “dollar signs in his eyes” when he took Nova Henry on as a client in a child-support case against Curry, who was then playing for the New York Knicks. Curry did not testify in the trial.Goings and Nova Henry developed a romantic relationship that prosecutors said stretched over two years. But their relationship took a tumultuous turn when Nova Henry hired a new lawyer and made plans to contest $24,000 in legal fees charged by Goings.In 2007, Nova Henry took out an order of protection against Goings after she said he threatened her and her son, but she let it expire, McKay said.On Jan. 24, 2009, Goings opened fire on Nova Henry as she stood at the bottom of the stairs in her South Loop town home, according to prosecutors. Earlier this month, Noah’s grandmother Yolan Henry testified that she and her boyfriend found the bodies a few hours later. They also discovered Noah and asked him what happen.“He turned around and looked at me and said, ‘Frederick,’” Yolan Henry testified. “He repeated, ‘Frederick did it.’”McKay described Goings as a “true coward” for fleeing on that day to a hotel in LaPorte County, Ind.. Prosecutors alleged he tried to erase any trace of the double murder by jumping naked into a swimming pool, wandering in a nearby forest and washing his fingernails to try to get rid of gunshot residue. A bullet matching linked to the murder weapon was later found in Goings’ car, they said.”