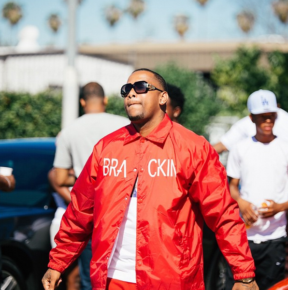 Atlantic Records, along with Grammy-nominated singer/songwriter/producer Ty Dolla $ign’s THMVMNT (pronounced The Movement) label imprint, announce the signing of Los Angeles-based rapper, Joe Moses. The news was announced earlier today via Billboard and is heralded by the release of his new single “Back Goin Brazy (feat. Future).” The Southside-produced song will appear on Joe’s label debut EP, SoWop EP slated for release next month. “Back Goin Brazy (feat. Future)” is available at all digital retailers & streaming services: https://Atlantic.lnk.to/BackGoinBrazy

“Me and Joe been doing this for years, so why not make it official? He’s one of the dopest rappers out there and it’s time to take it to the next level with my team at Atlantic. I’m excited for my next chapter as an artist and now a label head and it’s only right for my bro JM to be the first artist on THMVMNT,” says Ty. Joe Moses mirrors his excitement in a conversation with Billboard stating, “Signing to MVMNT was nothing new. Ty is family and I wouldn’t want to be around no one else.”

Moses will further join his longtime friend and collaborator on select dates on Ty’s “Don’t Judge Me Tour,” which kicked off earlier this week and will continue through mid-April (see attached itinerary). For more information, please visit www.dollasignworld.com.

After inking a deal with Atlantic Records in 2012 as an artist himself, Ty Dolla $ign has since gone on to become one of the most in-demand and sought after songwriters and collaborators in music today, while selling millions of singles and albums. His debut album FREE T.C. was recently RIAA-certified Gold, while its singles all each have multiple platinum certifications. Ty released his highly-anticipated sophomore studio album BEACH HOUSE 3 in October 2017 , which features the hit singles “Love U Better (feat. Lil Wayne & The-Dream)” and “Ex (feat. YG).”