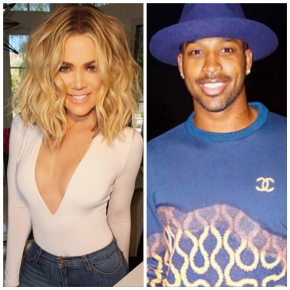 Khloe Kardashian and Tristan Thompson made headlines after packing on the PDA at aDrake concert in Los Angeles over the weekend, and now E! News has learned the romance rumors might be more than just rumors after all.

A source tells us the pair “have gotten much closer” over the last couple weeks, and though they’re “not too serious yet,” Khloe has a blast with him.

“She hasn’t had this much fun since she was with James [Harden],” the insider revealed.

The information comes shortly after their night out in LA, during which video footage was caught and quickly surfaced online, showing them sharing an intimate moment while Drake performed “Too Good” in the background.

In the clip, their arms are wrapped around each other as they swayed from side to side. Khloe even sealed the deal, laying a quick smooch on the NBA star’s lips.

Later that night, the 32-year-old reality star took to Snapchat to document the rest of their steamy evening, which included time spent with Kris Jenner. The trio played around with Snapchat filters, and Khloe shared a selfie alongside Tristan and her mom with a large heart across it.

Meanwhile, romance rumors regarding Khloe and Tristan first started to swirl earlier this month when the duo flew to Mexico for some fun in the sun together. In between afternoons spent riding jet-skis and lounging by the pool, an eyewitness told E! News, “It was clear they were a couple.”

“They were PDA-ish but not overboard though, laughing together a ton and having a super good time,” our insider explained, adding that the pair sipped on tequila and munched on sushi throughout the day.

Joined by friends, Khloe and Tristan were also spotted at Mandala nightclub in Downtown Cabo on multiple occasions, where a source told us, “They kissed a couple of times and held hands. They looked happy and were having a good time.”