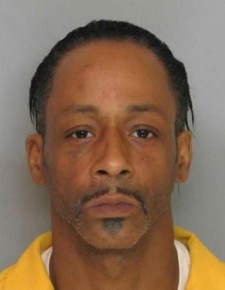 (Gossip-Grind) Katt Williams Arrested In Georgia For Attacking His Bodyguard:

An intervention is needed for Katt Williams because the 42 year old comedian is quickly spiraling out of control. Williams was arrested again on Tuesday, his second arrest in Georgia this month. Last week, Williams was arrested for punching a store clerk in Gainsville, Ga. He was also accused of brandishing a gun at five women who wanted to take a picture. Over the weekend Williams got beat up on stage at a Philadelphia club during a Beanie Sigel concert.

Williams was arrested Tuesday, officials in Georgia say he was involved in the kidnapping and assault of one of his bodyguards, identified as Corey Dixon.

Williams and two female acquaintances are accused of confining and assaulting Dixon after he did not engage in criminal acts as directed by Williams, the sheriff’s office said. One woman, Tatiana Smith, 24, is accused of choking Dixon and assaulting him with a baseball bat, and Williams threatened to kill him, the news release said.

During the search, investigators found large quantities of marijuana and several firearms, the sheriff’s office reported.

Tatiana Smith is charged with aggravated assault, misdemeanor marijuana possession and possession of the drug Alprazolam.

Lena Smith, 40, is charged with felony possession of marijuana.

All three were transported to the Hall County Jail, where they remain. A committal hearing is set for 2 p.m. Wednesday.(Gainesville Times)

A spokesman said Williams had no comment on the latest arrest.