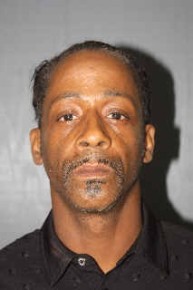 Can someone please go find Katt Williams (he’s probably somewhere in the hood) and physically remove him from the state of Georgia? Authorities in East Point,Ga arrested the comedian/actor after he threw a salt shaker at a restaurant manager (I can’t wait to hear Katt’s explanation for this one). This is Williams’ fourth arrest since February, all on separate assault charges.

Just after 10 p.m. Wednesday, East Point police responded to a call about a fight inside Spondivits restaurant in the 1200 block of Virginia Avenue, Capt. Cliff Chandler said in a statement.

“Once at the location, the officers found an individual bleeding from an injury to his upper lip,” Chandler said. “Interviews of this victim and witnesses were conducted and Katt M. Williams was identified as the alleged perpetrator of this incident.”

Williams left before police arrived; he was found a short time later at a nearby Waffle House. (AJC)

Williams is facing a battery charge and bonded out of the East Point jail around 12:30 a.m. Thursday.