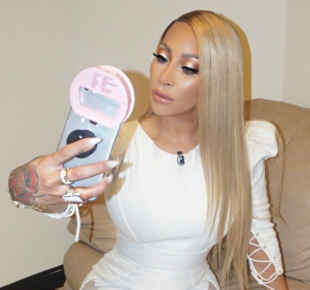 Huffington Post reports,  Hazel E’s comments weren’t just ignorant; they were a direct attack to dark-skinned women and queer people. And Hazel E’s former publicist has a frank message for her: “we don’t hate you — we’re just highly disappointed in you. And know this: we do not accept your bullshit apology.”

Erica Adams, more commonly known as Hazel E, is a reality television personality who stars on Love and Hip-Hop Hollywood. She’s best known for having drinks thrown in her face, nearly getting her blonde wig snatched off her head, and pretty much everything except for her mediocre music.

This past week, the Love and Hip-Hop actress was under fire for her homophobic and colorist comments. It is also confirmed that she will not be returning for another season of Love and Hip-Hop.

After comedian Jess Hilarious accused Hazel E’s boyfriend, Rose Burgundy, of tasting the rainbow (and I don’t mean tropical flavored skittles), he decided to post a picture of a burning LGBTQ flag on Instagram with a very anti-gay message. Hazel E reinforced her boyfriend’s disgusting post with an equally offensive comment.

Hazel E’s former publicist, Sharika Soal. And she, like many other dark-skinned women, are utterly grossed out and disappointed by Hazel E. “I’m so disappointed in Hazel E. I’m actually shocked that her hate is so deep,” she said.

The former publicist does not mind calling Hazel E out to her face or on social media. Check out her tweet:

So how does a former “publicist” NOT grasp calling all darkskin women “gorillas” while a CAST-MATE on a urban tv show = ❌❓ https://t.co/vQTRxEmRCq

In 2015, back when the feisty publicist, Sharika Soal, worked with Nati Celebrity Services, Hazel E was one of her clients. She claims that Love and Hip-Hop personality had trouble paying her PR fees, and as a result exploited fruitful publicity and bailed when it was time to pay up. “For her to always talk about “the hustle,” and take advantage of my hustle… It’s sad. That’s not cute,” she said.

Hazel E’s former publicist also said, “I let it go. I didn’t confront her for not paying me, but what I’m not going to allow her to do is talk about dark-skinned women and the LGBTQ community… I’m two years younger than her, and I’m appalled by her behavior. That’s not how a hustler or a real woman should ever conduct themselves. I’m actually sad for her…”

“We need people that are not afraid to show each other love right now. With all things going wrong in the world, we need to not add to the boiling pot of White supremacy and homophobia. Hazel, you’re wrong, but I can’t hate you because you are still a Black woman” Soal said.