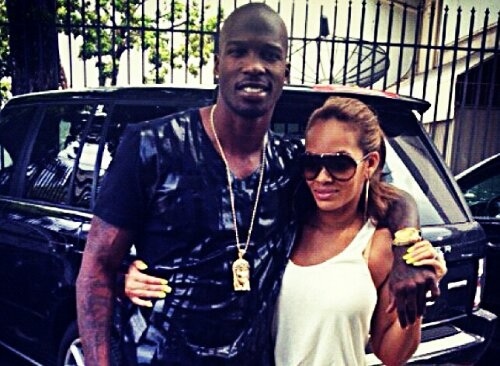 Evelyn Lozada met up with her ex-husband Chad “Ochocinco” Johnson in a Florida courtroom this morning. It was the first time the reality star has come face to face with the former NFL star since his arrest in August for headbutting her. Lozada asked the judge to lift the restraining order that she had against Johnson. TMZ reports:

“Evelyn and Chad both appeared in a Florida courtroom … where Evelyn asked the judge to drop the restraining order that was placed against him after she told police he headbutted her during an argument.After the incident, Evelyn quickly filed for divorce from Chad — after just one month of marriage.”

“Chad has been on a tour of contrition on TV and the Internet ever since … apologizing left and right … and admitting he has an anger problem. Chad also revealed that he’s getting professional help to deal with his rage issues.”

“During the court hearing, the judge asked Evelyn if she had been threatened or coerced into making the request to drop the order … to which she replied, “No.”The judge also asked if she was afraid of Chad … and she also replied, “No.”