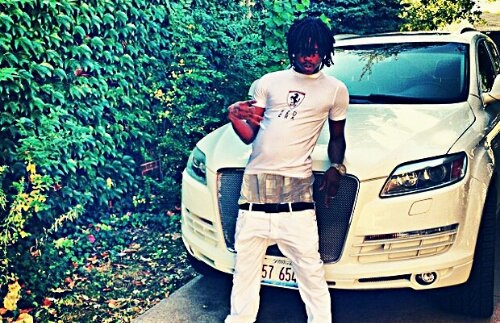 Teenage rap star Chief Keef was arrested earlier this week for violating his probation by having a gun in his possession during an interview. The Chicago rapper was sentenced today to serve 60 days in juvenile detention.

“The rising teen rap star was sentenced to 60 days in jail Thursday for violating his probation from a previous gun charge — when hepointed a gun at Chicago police officers.”I beg you, please,” Chief Keef pleaded with Juvenile Court Judge Carl Anthony Walker. “Give me one more chance to show you. … I am a very good-hearted person. I have not picked up any more cases. That’s not my life anymore.”The 17-year-old rapper, whose real name is Keith Cozart, then broke down in sobs. His mother bowed her head and cried, too.But the judge hit him with a two-month sentence nonetheless. He said letting Chief Keef return to his family’s custody would be detrimental to the rapper and the people of Illinois. Prosecutors said in court that Chief Keef is a member of a faction of the Black Disciples street gang known as “Lamron” — which is Normal spelled backward. Authorities say it’s a gang reference to a stretch of Normal Boulevard in Englewood, Chief Keef’s old neighborhood.Chief Keef, wearing county-issued blue sweats and white canvas shoes, hugged and kissed his mother and grandmother before heading off to serve his time.”