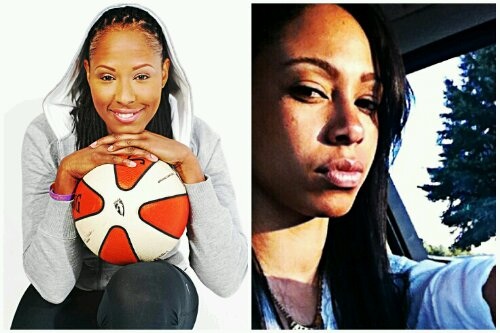 Former WNBA star and Olympic Gold medalist Chamique Holdsclaw has turned herself into Atlanta police for shooting into the car of ex-girlfriend Jennifer Lacy,who plays for the Tulsa Shock. The Atlanta Journal-Constitution reports:

“Former basketball star Chamique Holdslaw turned herself in Thursday night after an arrest warrant was issued following a dispute with a woman that allegedly turned violent, Atlanta police said.”

“Holdsclaw, 35, of Smyrna, was booked into the Fulton County jail shortly before 9 p.m., according to jail records. She was charged with aggravated assault, criminal damage to property and reckless conduct, police said. Her bond was set at $10,000, jail records show.”

“Jennifer Lacy, 29, who described herself as Holdsclaw’s former girlfriend, told police she was working out at a church on Ponce de Leon Avenue on Tuesday when Holdsclaw approached her and said she wanted to put some items in Lacy’s car.”

“According to an incident report obtained by Channel 2 Action News, as Lacy drove from the church she smelled gasoline inside her vehicle and noticed that Holdsclaw was following her.”

“Lacy said she drove to a friend’s house on Hemphill Avenue, at which time Holdsclaw got out of her car with a baseball bat and began smashing the windows in Lacy’s Range Rover, the report said.”

“After breaking the driver’s side window, a rear passenger’s window and the rear window, Holdsclaw produced a handgun, fired inside the SUV and fled the scene, the report said.”

“Police said they later recovered a 9mm shell casing at the scene. Lacy was not injured, police said.”