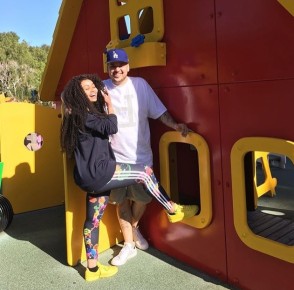 There’s some more exciting news that Blac Chyna and Rob Kardashian have yet to reveal.

Shortly after finding out that the couple are expecting their first child together, E! News has learned that the pregnant star is due in the fall, and that the pair already know the sex of the baby! But they’re going to announce that little gem of information in their own special way.

“They do know the sex of the baby and will reveal it soon enough,” a source tells E! News, adding that the engaged couple, “are so happy about the news. Chyna wanted another baby and said if it happens, it happens.”

The insider continues, “Chyna is not done with having babies she wants more.”

As for how Blac is doing with the pregnancy, the source tells us, “Chyna had a bit of morning sickness and felt pretty tired but is doing OK. Rob and Chyna will be getting one of the rooms in his house all ready for the baby. Chyna told [son] King about his new sibling on the way. Tygaknows and gave Chyna and Rob healthy blessings. It’s a happy time for the family.”

The Kardashians are also excited for the new addition. “They are happy for Rob.”

Blac Chyna’s attorney also echoed similar sentiments when asked how the parents-to-be are feeling about the big news, telling E! News, “She is very happy and very excited.”

He added that Chyna was very sweet and coy when she revealed the pregnancy news with him. “It was a beautiful moment,” he said.

On Friday, the 27-year-old announced that she is pregnant with her second child, just weeks after revealing she was engaged to Rob. The parents-to-be shared the news within minutes of each other via Instagram, using an emoji of Blac rubbing her baby bump. In April, the duo announced their engagement in a similar fashion, as Blac shared a photo of herself wearing a massive diamond ring with the caption, “YES!…!…!”

Perhaps they’ll be following suit for the sex reveal? Emoji-watch has officially begun.