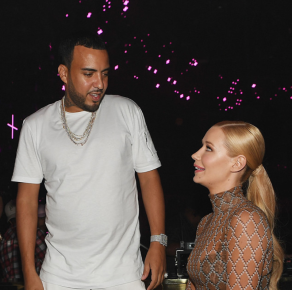 Last week, Iggy Azalea and French Montana were spotted together in Las Vegas, attending Jennifer Lopez’s All I Have residency show at Caesar’s Palace and later partying into the wee hours of the morning.

While many speculated on whether the pair might be heading in a romantic direction, the female emcee quickly cleared up the rumors while chatting with E! News at the 2016 Maxim Hot 100 party over the weekend.

“No, we’re [just] collaborating,” she said, shutting down any idea of a romance.

She further explained, “I’ve got another single coming out with French Montana, so we recorded it while I was in Las Vegas last week. It should be having a music video filmed to it in the next few weeks.”

She also got to chatting about being a judge on the X Factor alongside Adam Lambert, admitting that she thinks she’s easier on the contestants than he is.

“I think I’m the nice one! I thought that I would be the mean one but Adam is so spicy,” she laughed. “He really tells it how it is. I’m pretty meek compared to him.”

Meanwhile, it’s been a busy couple of weeks for Iggy. Last month, she announced her split fromNick Young, ending their engagement after dating for more than two years (the rapper’s most high-profile public relationship thus far). She accused Young of cheating on her and it was later revealed that he had gotten his ex and mother of his son pregnant.